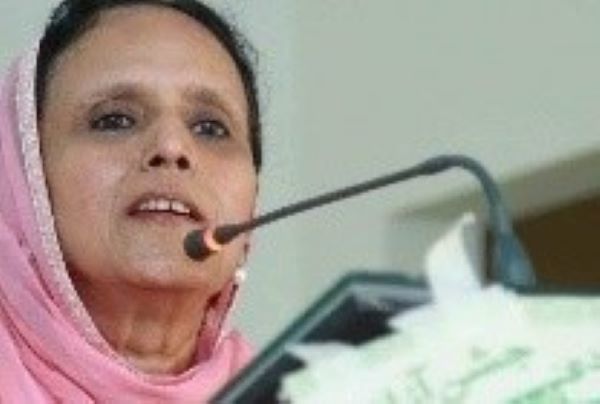 Where are you from?

Tell us about your work in general and about the survey you contributed to GDD.

I am a Nutritionist with the background of Home Economics. I study how people choose and use food at home can affect their health. I have been interested in finding out how can we improve the food-related practices of families living in Karachi. Thus I tried to find the nutritional status of families and their food-related practices at various income levels so that we can find out domains of food systems at each income level that can be made healthier.

The data I contributed is from a study that explored the nutritional status of urban affluence children.

A total of 780 adolescents (352 girls and 428 boys) ranging between the age of 10 yr. to 15yr. participated in the study. Data was collected through questionnaires concerning food frequency and eating habits. The questionnaire was filled by the respondents themselves in the classrooms. Anthropometric measurements including height, weight, waist-hip ratio, mid-upper arm circumference, and skin fold thickness were taken to observe the nutritional status of the adolescents.

The diet of the adolescents studied did not appear to be balanced. Their diet mostly comprised of fatty and sugary food in the form of snacks (13.61 times/week) along with beverages (16.46 t/wk). Boys mostly consumed meat (12.26 t/wk), cereals (19.71 t/wk), beverages (18.30 t/wk), snacks (15.60 t/wk) and desserts (13.60 t/wk), whereas girls ate fruits (13.24 t/wk) more frequently than boys. It appears that adolescents having above-average BMI were either consuming foods less frequently because of being conscious of their body image or they might have underreported their food intake. The dietary intake pattern of taller adolescents was apparently better than of their shorter counter parts. Most of the adolescents were found to have irregular food habits (55.6%). Adolescent boys followed regular food habits more frequently (80%) as compared to girls. Adolescents having above-average BMI and those having below average height had regular food habits more often than those who were relatively taller and thinner.

How did you become interested in the field of nutrition?

I became interested in the field of nutrition at age 10 when I studied Home Economics in grade 6 in school. I joined a Home Economics group at secondary and higher secondary level so I got to know more about food and nutrition. I majored in Food and nutrition at graduate at post graduate levels, taught nutrition, and did my PhD in Nutrition from 1993-1997. Since then, I have been and am actively involved in contributing to human nutrition through teaching, research, and other activities at national and international levels.

What is one of the biggest nutritional challenges facing your country today?

Continuation of and escalation of nutrition problems in Pakistan in spite of several national-level projects undertaken in the previous 70 years is disappointing. The current situation is not so much due to lack of resources but mostly due to misuse and ignorance of professional expertise, lack of collaborations among professionals, and absence of systems, standardized processes, and surveillance.

Western influences, TV, and internet have impacted the traditional eating habits of Pakistan people which has driven an increase in fast foods and fewer meals prepared and eaten at home. This influence has caused a rise in obesity, high blood pressure, diabetes, and heart disease although these diseases are also seen in those of normal weight.

Although a few employers (mostly hospitals) now recognize the importance of qualified dietitians, there is no legal requirement for any specific credentials to serve as a nutritionist or dietitian. Qualified persons often have to implement nutrition-related decisions taken by professionals not qualified in nutrition.

How do you see GDD factoring into your research in the future?

I have been guiding several projects that included valuable dietary data that I or other team members could not get time to publish. I estimate collectivity it can get some valuable information about trends. Lack of availability of national data is a big issue locally. If GDD can get and I can get a chance to analyze it that would be very useful.

What directions or results do you hope to see in the field of global nutrition research in the future?

I hope GDD could convince UN’s and other relevant international agencies to encourage and assure public availability of dietary data form surveys supported by these agencies, assuring quality, validity of national level food consumption data, and dietary surveillance for all countries that get funding form these agencies.

I wish to see better use of data by having more uniformity in data collection/reporting methods by the availability of affordable/free data collection tools. Also, ongoing projects for collecting information about methods of food preparation and patterns of consumption i.e. combination of foods, use of utensils, additives, adulterants, the accuracy of labeling etc. I believe these variables influence health outcomes, especially in developing countries.

Thank you to Dr. Rubina Hakeem for contributing to this quarter's Meet Our Corresponding Members section.

This interview has been edited for clarity.

I love the diversity of the…

I love the diversity of the organization, it makes people secure that there will be no distinction of services.